July 13th marked the filing deadline to officially declare candidacy in Wisconsin for a wide range of offices from Governor to Congress to the State Legislature among others. In order to make their campaign official, candidates had to turn their nomination signatures in to have their names placed on the fall primary and general election ballots. While much of the focus of media coverage across the state will be on the hotly contested races for Governor, in which AFSCME has endorsed Milwaukee Mayor Tom Barrett, and US Senate, AFSCME is now fully engaged in the process of reviewing the various candidates for legislative offices.

Senate and Assembly Up For Grabs

Wisconsin State Senators serve four year terms, and the elections are staggered so only half of the body is up for relection at a time. This means 17 of the 33 seats are up for re-election in November of 2010. In two of those seats the incumbent is retiring (Sen. Alan Lasee, R-DePere and Sen. Judy Robson, D-Beloit). There are expected to be at least a half a dozen highly competitive races for State Senate this fall, and with the Democrats currently holding a three seat advantage, control of the house is very much at stake.

Wisconsin State Representatives all serve two year terms, making each of the seats up for election this fall. So far, 18 members of the 99-member state Assembly are leaving for retirement or to seek other opportunities. The past two years the Democrats controlled this chamber with a five vote pro-labor majority. As a result, AFSCME saw many initiatives get passed and signed into law that never saw the light of day during the decade and a half Republican control.

Questionnaires have been sent to the hundreds of candidates running for the state Assembly and Senate. The questionnaire asks candidates their positions on a wide range of issues, including collective bargaining rights for public employees, to pensions, to contracting out of public services to tax fairness. Based on the returned questionnaires along with candidate interviews by AFSCME members around the state, the State Employees Political Action Committee will make endorsements in many districts across the state based on recommendations from affiliated local unions. Come late summer and fall, we will provide information to AFSCME Council 24 and 48 members throughout Wisconsin on the endorsed candidates.

Election day this year is November 2nd, with primaries being conducted on September 14th. This will leave a short time frame for us to educate ourselves about the candidates running for legislative offices and their positions on issues that matter to AFSCME members and the public services we provide. With a looming $2.5 billion budget shortfall, much is on the line. Please get involved in spreading the word on pro-worker candidates to your AFSCME brothers and sisters, family and friends this fall.
Posted by AFSCME Council 24 SEPAC at 7:03 PM No comments:

Local Presidents have received information about “Next Wave”, which is the national union’s educational and informational platform for members aged 35 and under, and this September Wisconsin AFSCME is sponsoring the first Next Wave Conference. The registration deadline is fast approaching. Local Presidents are asked to consider sending younger member(s) to this innovative and ground breaking conference. Members under the age of 35 are the future of our union, and we all benefit by enhancing their AFSCME education and involvement, and strengthening their connection and investment in the union. The Council executive board has approved a grant to locals sending participants to help offset costs. If you have misplaced the registration forms, they are available on our website (wseu-24.org). Or, give us a call at the Council and we’ll forward them to you.
Posted by AFSCME Council 24 SEPAC at 7:02 PM No comments: 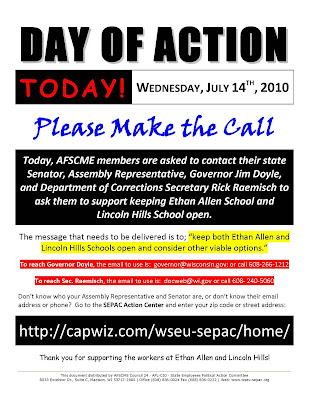 Sly In The Morning

Visitors to the SEPAC Blog